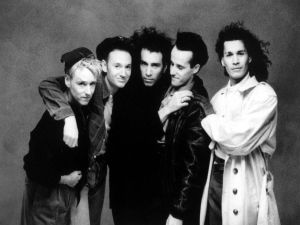 Continuing this month is my A-Z Challenge theme of 80s bands. This month, the letter B put me in a bit of a conundrum – I couldn’t decide which one of two 80s bands to base this blog post on; the two bands in questions being The B52s and Boom Crash Opera. Both bands played a big part in my life during this decade. Sure the B52s are known as ‘The World’s Greatest Party Band’ (which is appropriate for the 80s) and are great to see live, yet when I think of Boom Crash Opera, I’m reminded of listening to them whilst driving around in my first car – a feeling of freedom and independence.

An Australian band, Boom Crash Opera were formed in 1985, and their debut single ‘Great Wall’ was released the following year. It would go on to win Best Debut Single and a self titled album followed in 1987. The album would go on to become gold and in 1989, they released the single ‘Onion Skin’ ahead of their second album ‘These Here are Crazy Times”. This album spent 40 weeks in the Top 50 and achieved double platinum status. In the years that followed, they released a couple more albums, but the band at this time were beginning to break up. The band continue to perform and release material; some of their songs have even been remade or used during political campaigns.

It is believed that this song is meant to be about drugs, but hey – it’s just a darn good song (and my favourite). 😉

Other bands formed or who had hits in the 1980s starting with the letter B include:- The B52s, The Bangles, Big Pig, Blondie, Bronski Beat, Bananarama, Bros., Blancmange.

What other bands of the 1980s that begin with the letter B can you think of? Is there a particular band that stands out when you think of your own independence during your teenage years?